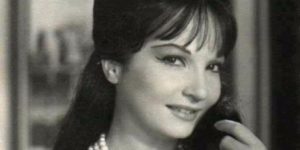 Between 1958 and 1986 Shadia  started in too many musical theatrical shows, radio and television plays and sketches to count. She was the star of 114 songs many of them still played today or performed by other singers.

Born Fatima Ahmed Shaker in Cairo in 1981 to a middle class father working a a Rural and farming engineer with the state  Department of Agriculture and Irrigation, who encouraged her to apply for drama and film apprenticeship at the age of 14. By the age of 16  she auditioned before one of Egypt film industry pioneers  director Ahmed Badrakhan, who gave her a singing role.

Although most of her roles in the 1950s were in light-comedy and  musicals, mostly Egyptianising Hollywood musical comedies, by the early 1960s she worked with progressive film makers taking part in influencing the script with subtle feminist message about equality and changing the perception of women’s role in, and contribution to, society.

In 1966 romantic comedy film  Meraty Modeer Aam “ My wife, is the ministry’s Director General” she added lines and interpreted the part of a working wife that not only overtook her husband’s performance at the job,  but also added sexual freedom given by the confidence which a woman’s economic independence secures.

But her 1963 role in Egypt’s novelist and Nobel literature laureate  Naguib Mahfouz  novel Zouqaq el_Midaqq ( The narrow Ally) was the one that gave her the confidence to make an input into the script and convinced many film makers and producers to take her seriously. 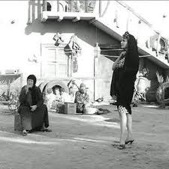 As her songs, and musical theatre became  popular and her cinema performance secured box-office takings, she became more confident and choosy  by mid 1960s accepting only serious roles with progressive social message like defiance in face of oppression. Her 1969 performance in the film   Shaie Min el Khouf ( a touch of fear) where the little sharecroppers stood in defiance against the strong landowners despite having the law of the side of the landowners. 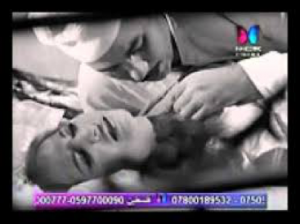 But people still remember her as a great songstress in the popular patriotic-romantic song “ melodies by the Nile – my beloved Egypt”. Although composed in 1969 and Shadia performed it early 1970, placing her alongside Egypt’s great singers-musicians  like Sayyed Darweesh the composer of Egypt’s national anthem, Shadia’s 1970 “ melodies by the Nile,” became known as belady  ( my homeland) made history when sung by hundreds of thousands in Tahreer-Square  2011 uprising and again by millions in june 2013 overthrowing the fundamentalist Muslim Brotherhood regime. The song, often performed by young female singers, was elevated to a handful of songs that have deep emotional effect likened to that of the Egyptian national anthem.

Although dubbed by her adoring fans for over three decades as Dalouat el-cinema (Cinema’s sweetheart), the younger generations who didn’t experience her flirting roles 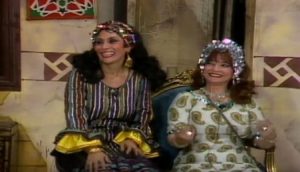 between 1947 and 1967 will always remember her excelling in the 1980 theatrical role of the musical black-comedy Riyah and Sakinah, an operetta of a true story of two mass-killer Alexandrian  women  in the 1920s who, for two years, killed over two dozen women and buried them in the basement of their house, which they leased from the police 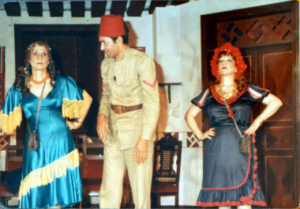 Following the spiritual muslim concert, the actress who played bedroom love-scenes and many  parts of nightclub hostess bathing in adoring fans’ champagne retired taking up the veil, like many actresses and belly dancers between 1985 and 1990. Egyptian newspapers reported they were given millions of petrodollars by oil sheikhs from the Gulf. None of the entertainment newly veiled ladies demanded retraction from the publications.