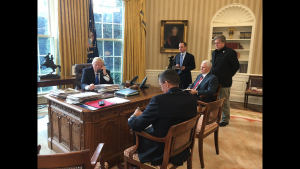 President Donald Trump addressed Iran in a tweet, “Iran is playing with fire — they don’t appreciate how ‘kind’ President Obama was to them. Not me!” 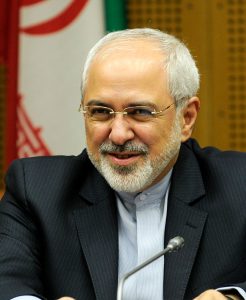 Responding, also via twitter, Mohammed  Javad Zarif, Iran’s foreign Minister said “we will never use our weapons against anyone, except in self-defense.”

The Treasury Department accuses Iranian businessman, Abdollah Asgharzadeh, of procuring material for the ballistic missile program. Mr Asgharzadeh was among 13 Individuals mostly from Iran, who were named by the department as targets for the sanction.   The 13 targeted are part of a network including nationals of from the United Arab Emirates, Lebanon, China, and Saudi Arabia. 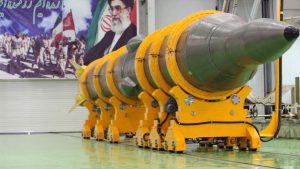 A prior test by Iran, post nuclear deal, was subjected to similar sanctions by Russia. The Iranians believe they may test these weapons, which they call defensive, and they do not need to ask.

After the test was completed, Russia also said Iran was free to test.  In a press briefing yesterday, National Security Adviser Michael Flynn told reporters “As of today, we are officially putting Iran on notice” There was confusion over what “on notice’ might mean. Mr. Trump asked later inthe day if he would rule out a military option. Mr Trump said, “nothing is off the table.”

Iran is not in violation of the nuclear deal or the UN Security Council. When the Iran deal was being negotiated, the UN Security Council dropped language restricting missile testing replacing it with a ‘suggested’ (but not required) eight -year prohibition of testing and of the purchase of foreign missiles. The nuclear deal makes no mention of non-nuclear testing.The specific language in the July 20 last year  UN Security Council Resolution 2231, found on page 99 in Annex B states, “Iran is called upon not to undertake any activity related to ballistic missiles designed to be capable of delivering nuclear weapons, including launches using such ballistic missile technology, until the date eight years after the JCPOA Adoption Day or until the date on which the IAEA submits a report confirming the Broader Conclusion, whichever is earlier.”  “Called upon” is different than “required.’ It is ambiguously permissive. Former Secretary of State John John Kerry and the Obama administration gave assurances that Iran would comply and that the UN would not let Iran get away with any ballistic missile testing, but admitted that it was not required to comply.  The US sanction place the expectation on Iran to self-monitor and meet world expectations on testing, but Iran’s test is not in breach of the UN resolution.