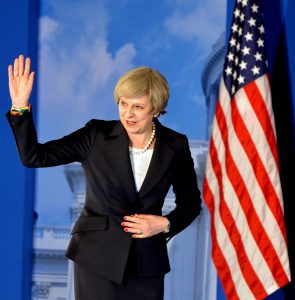 Mrs May is the diplomat that carried the message from Europe of the importance of international institutions like NATO, “the cornerstone of the West’s defence” and keeping commitments to the UN while recognising need for reform.

Like rainwater to the desert, speaking not as a Prime Minister, but as a Conservative, she roused the spirit of what it means to be a Republican, self-determination, economic prudence, patriotism, family. Members of congress responded to a speech that was tailored for them that their own president could not have delivered with his direct, abrasive, down to business style.

An outsider unencumbered by the constraints of diplomacy, President Trump was hired to get things done, to break things, to unravel the march toward Obama’s vision of a progressive European-style social democracy. Both leaders find themselves at the helm of deeply divided nations with similar divisions, each with their own versions of rebellious, populist, nationalist, self-determination Leave and globalist, progressive Remain. They face a tough world cordoned off from European unity and Pacific trade potential. The case May made, was to renew the Special Relationship, “as you renew your nation just as we renew ours,” we have the opportunity to lead together again.

The Prime Minister made the case for the sovereign nation’s superiority to the modern model of multinational governance and liberal interventionism. The nation-state can trade freely, enter agreements, provide for defence, and determine its destiny. A nation-state is held accountable to its populace. She called out the world’s poor performers, “sovereign countries cannot outsource their security and prosperity to America.” Acknowledging America’s burden as the leader of the free world, May pledged to “share that burden and to walk alongside you at every stage.” She confirmed that Britain is the only country in the G2o, other than the US to meet the commitments, that thorn that Trump has in his side, that countries spend two per-cent (2%) of their GDP on defence.

Setting Britain and America as one conjoined twin, the beacon of freedom, she complimented the American experiment conceived in the city where she spoke, Philadelphia “That all are created equal and that all are born free has never been surpassed in the long history of political thought”

Then she said it, what we were all waiting for, the Prime Minister seeks a free-trade agreement with the United States. Such an agreement would bring Britain the needed guarantee that Europe would treat her as an equal, give her the worldwide stature, other nations would follow to make agreements with her.. 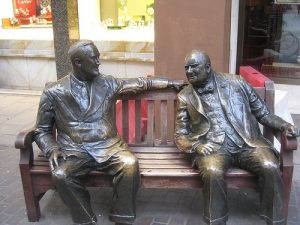 The historic Special Relationship forged by Churchill and Roosevelt is the answer. A friendship that was all but gone under Obama who gravitated toward Europe, symbolically expelled Winston Churchill’s bust. President Obama told Britain that if it voted for Brexit, America would put her at the “back of the queue.” He couldn’t have been more wrong. Republicans, waited 8 long, painful, dark years to wake the sleeping giant and return to the world order. Allegiance with Britain would enhance President Trump’s power too by giving him political credentials, international support, and reducing the power of his detractors.

Among Trump’s first actions was to put Churchill back in the Oval office. The Lady and Trump have put Britain at the front of the queue, have much in common.  A saviour of a trade deal to cement the sisterhood of nations is on its way.