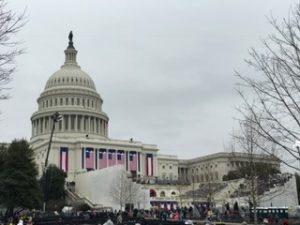 His primary purpose was not to disparage — he appears to genuinely like them — it was to deliver a stinging critique of what he presented as an entrenched system, serving the powerful elite that runs it and neglecting those it is there to serve: “For too long, a small group in our nation’s Capital has reaped the rewards of government while the people have borne the cost. Washington flourished — but the people did not share in its wealth.” He noted that “the establishment protected itself, but not the citizens…Their victories have not been your victories; their triumphs have not been your triumphs; and while they celebrated in our nation’s capital, there was little to celebrate for struggling families all across our land.”

Inside Trump’s populist revolution is embedded a core belief: “that a nation exists to serve its citizens…What truly matters is not which party controls our government, but whether our government is controlled by the people. January 20th 2017, will be remembered as the day the people became the rulers of this nation again. The forgotten men and women of our country will be forgotten no longer.”

“That all changes — starting right here, and right now, because this moment is your moment: it belongs to you.”

If America’s elites were unnerved by these sentiments, they were probably in good company, as foreign powers no doubt listened with both interest and concern to Trump’s ‘America First’ theme, with its nationalist, populist and isolationist themes. No doubt they could readily imagine the canceled aid checks and the potential for trade tariffs, the latter seeming strangely at odds with Trump’s oft-stated enthusiasm for great deal-making. “For many decades, we’ve enriched foreign industry at the expense of American industry; subsidized the armies of other countries while allowing for the very sad depletion of our military; we’ve defended other nation’s borders while refusing to defend our own; and spent trillions of dollars overseas while America’s infrastructure has fallen into disrepair and decay.”

“We’ve made other countries rich while the wealth, strength, and confidence of our country has disappeared over the horizon. One by one, the factories shuttered and left our shores, with not even a thought about the millions upon millions of American workers left behind. The wealth of our middle class has been ripped from their homes and then redistributed across the entire world.”

He spoke of “…a new decree to be heard in every city, in every foreign capital, and in every hall of power. From this day forward, a new vision will govern our land. From this moment on, it’s going to be America First. Every decision on trade, on taxes, on immigration, on foreign affairs, will be made to benefit American workers and American families. We must protect our borders from the ravages of other countries making our products, stealing our companies, and destroying our jobs. Protection will lead to great prosperity and strength.”

Some foreign leaders will perceive an opportunity to deal with a non-politician who wouldn’t ignore the overture of a new relationship (a true ‘reset’ perhaps). “We will seek friendship and goodwill with the nations of the world — but we do so with the understanding that it is the right of all nations to put their own interests first….We do not seek to impose our way of life on anyone, but rather to let it shine as an example for everyone to follow.” Putin, and others who have long seen the US as a nation that frequently seeks to change regimes, may well feel a sense of peace, in contrast to the anxiety produced by the last two administrations through their interference with Saddam, Gaddafi, and Assad, and the withdrawal of US support for Egypt’s Mubarak.

The British should delight in the line, “We will reinforce old alliances and form new ones.” This sounded much like Prime Minister Theresa May’s pledge, but on free trade. Many also interpreted the comment as a softening of Trump’s previously stated criticism of NATO. The coalition involved in the war on terror got the President’s commitment to “unite the civilized world against radical Islamic terrorism, which we will eradicate completely from the face of the Earth.” It seemed notable that, after an eight-year period in which Obama pointedly avoided linking Islam and terror wherever possible, Trump made the link explicit and unambiguous, thus portending a sea change in US policy in this area.

The most criticized line in his speech was misunderstood: “This American carnage stops right here and stops right now.”

He was referring to the wastelands of LA, Detroit, Chicago, and cities across America where a cycle of poverty, failure, crime, and devastation thrives alongside gangs, drugs, danger, and lost opportunity — most particularly in the Black American population, which saw devastating levels of unemployment during in the Obama years.

“But for too many of our citizens, a different reality exists: Mothers and children trapped in poverty in our inner cities; rusted-out factories scattered like tombstones across the landscape of our nation; an education system flush with cash, but which leaves our young and beautiful students deprived of knowledge; and the crime and gangs and drugs that have stolen too many lives and robbed our country of so much unrealized potential.”

Many in America’s punditocracy were no doubt thinking of these passages when they labeled Trump’s speech as “dark”. However, this is the enormous American scar that is generally understood to be an off-limits topic, not to be talked about openly in polite company. Yet it has spread in the last decade to once-thriving working class towns where white men who used to live, work and raise families are now addicted to prescription opiates, are unemployed and have the highest suicide rates in the country.

“Americans want great schools for their children, safe neighborhoods for their families, and good jobs for themselves. These are the just and reasonable demands of a righteous public.” This is fresh stuff. The US has never had such a directive.

And on race, which Obama made a constant topic of his speeches: “It is time to remember that old wisdom our soldiers will never forget: that whether we are black or brown or white, we all bleed the same red blood of patriots, we all enjoy the same glorious freedoms, and we all salute the same great American Flag.” He sees a shared patriotism as the cure to racism: “Through our loyalty to our country, we will rediscover our loyalty to each other. When you open your heart to patriotism, there is no room for prejudice.” He asked Americans to unify as one community and dissolve prejudice, placing ownership of every American’s socio-economic problems on all Americans: “We are one nation — and their pain is our pain. Their dreams are our dreams; and their success will be our success. We share one heart, one home, and one glorious destiny.”

And with that he signed an executive order for a national patriotism day.