The House of Commons made of the re-elected and new members will  meet  on Tuesday Tuesday13 June 2017 following the General Election. It will be a meeting in the main chamber, and will be chaired by the Father of the House who is currently Ken Clarke, since technically, no speaker elected yet to chair this meeting.   The State Opening of Parliament will take place on Monday 19 June 2017, this will mark the formal start of the parliamentary year.

There is specific traditional order of constitutional steps to be conducted in the next few days in the House of Commons.

At the point of dissolution of the 2015-2017 parliament, the Prime Minister asked Her Majesty to summon the new Parliament to meet on Tuesday 13 June 2017,

The Father of the House Ken Clarke

On Tuesday, The Father of the House, currently Kenneth Clarke as the longest serving ember,  sitting in the speaker’s seat will open the meeting welcome members.

When all members are assembled, all present in the House, led by the Father of the House, walk across the central lobby into the House of Lords where they receive a message from the HM the Queen asking them to elect a Speaker.

If the incumbent Speaker is returned at the election and wishes to stand for re-election, that decision is made immediately.

If there is no returning Speaker wishing to stand again, or the House votes against the incumbent Speaker, a contested election by exhaustive ballot must take place to choose a new Speaker. 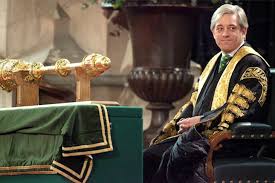 Unless there is a surprise, speaker Joh Bercow will be elected gain (he will be sitting on the conservative’s benches on the right, and then he will be reluctant and the members will drag him to be put in the chair).

As he starts the meeting the Serjeant-at-arms will place the mace on the desk between the two despatch boxes, which means parliament is officially sitting (the symbol of Royal authority  and constitutionally the mace has to be there. 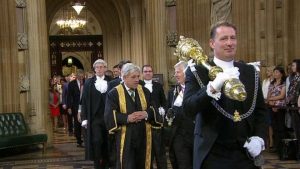 There will be speeches, welcoming new members and niceties will be exchanged.

On the day following the Speaker’s election, the House goes to the Lords once again. This time MPs will be led by the Speaker-Elect. In the lords they will hear another message from HM the  Queen confirming the Speaker’s appointment.

After the Speaker’s appointment has been confirmed  in the Lords the MPs then return to the Commons Chamber for MPs to be sworn in  It is called an oath of alliance (The wording of the oath is prescribed by the Promissory Oaths Act 1868. The form and manner of administering the oath are set out in the Oaths Act 1978.) .

This step is essential for an MP to sit in the chamber. ( and because Irish republican members refuse to take the oath of allegiance they never take their seats in the commons). 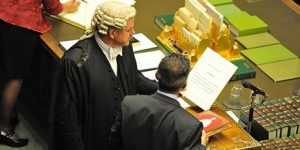 The 1978 Oath Act allow the oath to be taken in other languages like Welsh, Scottish Galic and  Cornish.

The member will take the oath by saying “I (name of Member) do swear that I will be faithful and bear true allegiance to Her Majesty Queen Elizabeth, her heirs and successors, according to law. So help me God “ .

There is a traditional order for taking the oath. First the Speaker takes the oath of allegiance, then followed by  Father of the House (the longest continuous serving Member); the the Prime Minster, the Cabinet Ministers; Shadow Cabinet Ministers; the Rt Hons ( members of the Privy Council also known as the Privy Counsellors);  Other Ministers;  Other Members in order of seniority (by the Parliament of first entry or, for those with broken service, that of most recent entry)

Any MP or Member of the House of Lords who objects to swearing an oath can make a solemn affirmation instead.

Swearing in continues for two or three further days before the House adjourns to the date set for the Queen’s Speech and State Opening Monday 19 June.